As the Hillary Clinton vs Donald Trump battle heads for a crescendo, Indian-Americans could emerge as an important group in making that decision, especially in the swing or battleground states, which are likely to be key in determining the results of the 2016 presidential election. And no surprise that both the Republican and Democratic candidates are making lastditch efforts to woo the desis, as the race goes down to the wire.

Trump last week became perhaps the first US presidential candidate to reach out exclusively to Indian-American voters through the Indian-American Advisory Council of the Trump campaign, with an almost unbelievable 59-second video. It starts with a Happy Diwali message and goes on to Ab ki baar Trump sarkar, borrowing from Narendra Modi’s 2014 election tagline. Clinton’s supporters countered to highlight that both she and husband Bill Clinton have been friends of India for many years.

Friends of Clinton have been quick to reinforce that bond. “I have known Hillary Clinton for over two decades and worked behind the scenes during her four official visits to India as first lady, senator and secretary of state. Both she and her husband have a deep commitment, understanding and respect for India and Indian Americans,” Indian American hotelier Sant Chatwal told ET Magazine from his hotel in Manhattan where he along with other supporters of Clinton — hotelier Mike Patel and Dr Bhupi Patel, a community leader — addressed the media early this week. Their message: Indian-Americans, who have historically supported the Democrats, should come out in large numbers and vote for Clinton, especially in the crucial battleground states. Chatwal, who was a big Democratic donor for Clinton in her 2008 presidential campaign and had come under a cloud in 2014 for illegal donations to the Democrats, has maintained a low profile so far in the presidential race.

“I definitely feel that we Indian Americans will make a difference in the outcome of this very close presidential race. While Clinton has a very strong edge among the community in the blue (Democratic-leaning) states, there are many Indian Americans in the red (Republican) states such as Florida, Ohio, Nevada and Colorado as well. We have strongly appealed to them to vote for Clinton,” Bhupi Patel, a doctor in New York, told ET Magazine after the media address. 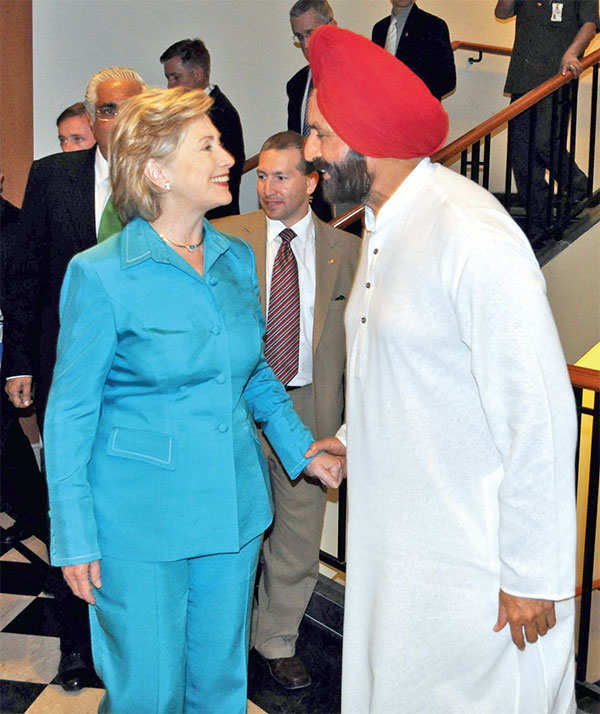 Florida had proved to be crucial for the Al Gore-George W Bush race where Bush won by just 537 votes and the Indian-American community, according to Patel, is being reminded of how close the race could get and how important their votes could turn out to be. “The Indian-American community has a tradition of supporting Democrats and in this election too we expect more than 70% to vote for Clinton. This is also based on her longstanding ties with the community and with India and her strong stand on issues dear to our heart such as immigration and education.”

The Trumpians
On the other side, Shalabh Kumar, a Chicago-based, Indian-American businessman, a big Trump donor and chairman of the Republican Hindu Coalition (RHC), feels that by reaching out to the Indian Hindu community so close to the big election day, the Republican candidate may have just gained a crucial edge.

“Hindu Americans are over 4 million in number and on many issues such as the US economy, jobs, fighting terrorism and aid to Pakistan the Trump policy resonates with them in a more positive way. We feel that in swing states such as North Carolina, Ohio and Florida, Trump has an advantage among Hindu Americans,” Kumar told ET Magazine. He himself has been working very hard specifically among the Indian community in Florida, North Carolina and Ohio and now hopes to deliver results.

Meanwhile, Indian-American supporters on both sides are on the edge of their seats. “It is imperative for communities of all ethnicities to vote and have a voice in the elections. Each community’s participation will have a significant impact on the end result,” says Shefali Razdan Duggal, who holds prominent positions in various Democratic panels. She has been working closely with the Clinton campaign and from her own personal experience believes that the South Asian community will be voting in substantially larger numbers for the Democratic candidate.

A recent National Asian American Survey found that north of 67% of Indian Americans supported Clinton during the primaries. Another new national online poll of Indian-Americans revealed that a whopping 79.43% of them would vote for Clinton, while 14.89% would vote for Trump on the day of the poll. The survey was piloted during Oct. 21-26 after the third and final presidential debate by IndUS Business Journal and its sister publication INDIA New England News based in Boston. Those numbers will surely be comforting for Clinton on the eve of the Big Day.