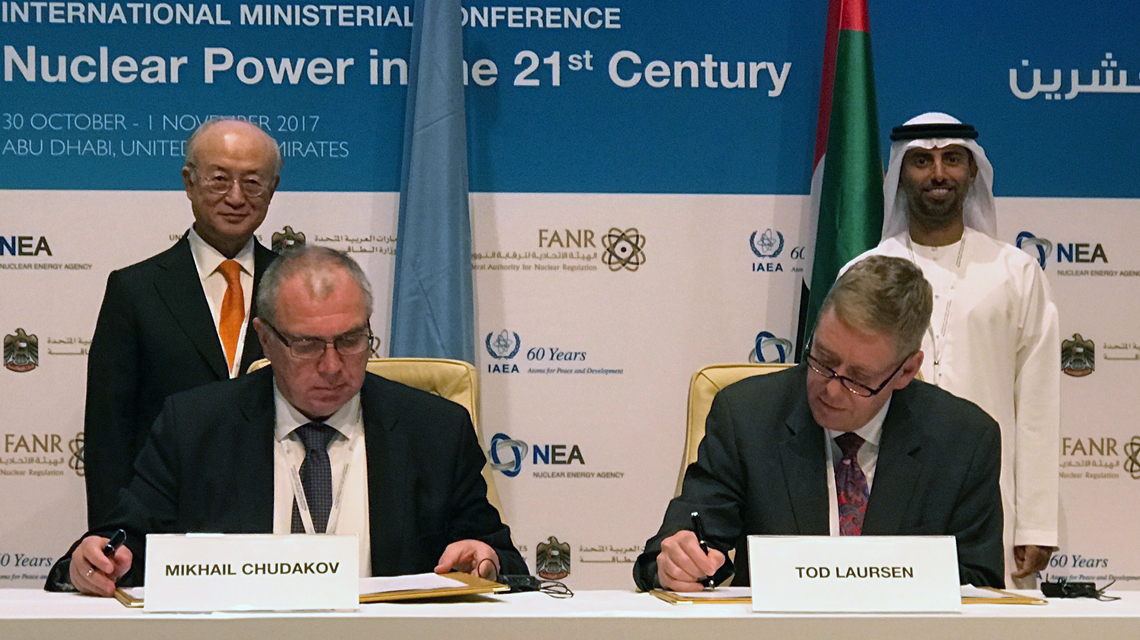 Countries looking to introduce nuclear power will be the beneficiaries of a cooperation agreement signed today by the United Arab Emirates (UAE) and the IAEA. The UAE, which is in the process of commissioning its first nuclear power plant, has undertaken to share its experience in nuclear power infrastructure development with experts from other embarking IAEA Member States.

The agreement marks the beginning of a four-year period of close cooperation between the University and the IAEA on implementing activities in the field of nuclear power infrastructure and human resource development. In particular, the University will support IAEA activities on enhancing Member States’ capabilities in building and assessing the infrastructure required for a nuclear power programme, as well as developing critical competences required for infrastructure development.

“The cooperation will enable professionals from embarking countries to benefit from the know-how which the UAE has developed in building its infrastructure, licensing and constructing its first nuclear power plant in line with the IAEA Milestones approach,” said Mikhail Chudakov, IAEA Deputy Director General and Head of the Department of Nuclear Energy, who signed the agreement on behalf of the IAEA.

Signing the agreement for Khalifa University, its Interim President Tod A. Laursen said: “We are honoured by the IAEA designation as an IAEA Collaborating Centre. Since I signed our first Practical Arrangement with the IAEA in 2010, we have engaged with the IAEA on human resource development through our Gulf Nuclear Energy Infrastructure Institute (GNEII) programme and by hosting the joint UAE-IAEA Nuclear Energy Management Schools. We look forward to enhancing our offerings in this area, both within the UAE and to support other IAEA Member States.”

Under the agreement, the University, in collaboration with the IAEA, will develop and implement specific courses, including modules for the GNEII programme, to train professionals in nuclear safety, security, safeguards, stakeholder involvement, legal and regulatory framework and other areas. A fellowship programme, including mentoring, will help fellows gain experience in specific areas of interest in embarking countries. In addition, the University will provide experts to support review missions, training courses and technical meetings organized by the IAEA.

Established in 2007 as an independent, non-profit institution for higher education and research in technology and science, Khalifa University has been working with the IAEA for a number of years. The University hosted several IAEA workshops on nuclear infrastructure development, the joint UAE-IAEA School of Nuclear Energy Management in 2012, 2015 and recently in May 2017, in which 125 fellows from eleven countries were trained. The University has also been hosting the joint UAE-US GNEII programme since 2011, providing training to 103 participants from Jordan and the Gulf Cooperation Council countries.

The University’s activities as an IAEA Collaborating Centre will be supported by key organizations involved in the UAE’s nuclear power programme, such as the Federal Authority for Nuclear Regulation (FANR), Emirates Nuclear Energy Corporation (ENEC), Nawah Energy Company, the National Emergency Crisis and Disaster Management Authority NCEMA and the Critical Infrastructure and Coastal Protection Authority (CICPA).