George Orwell saw it as a hunger for power “tempered by self-deception.” Albert Einstein called it an “infantile disease…the measles of mankind.” Nationalism is like cheap alcohol, said Dan Fried, a US scholar-diplomat who saw the birth of many new nations in Europe during his watch at the State Department: first, it makes you drunk, then it makes you blind, and then it kills you. In the US itself, the writer Sinclair Lewis warned that when fascism — the more extreme big brother of nationalism — comes to America, “it will be wrapped in the flag and carrying a cross.” Geography and religion form the potent mix for most nationalism.

Scholars and savants, sociologists and political scientists, across ages and across continents, have cautioned against rampant nationalism and its close cousin patriotism (famously described by Mark Twain as the “last refuge of a scoundrel”). But in country after country, from America to Europe to Asia, nationalistic fervor is all the rage, fuelled by everything from border disputes to sporting rivalry, from trade protectionism to cultural expansionism. The latest to join the list of triggers that spark patriotic and nationalistic outrage (always expressed loudly rather than quietly): terrorism.

Consider this: More than a million infants die every year of malnutrition and more than 100,000 youngsters are killed in road accidents every year in India — doesn’t evoke an iota of embarrassment from the nationalistic brigade. There are some 30,000 casualties from gun violence in the US every year, including more than 300 instances of mass shooting in 2015. No nationalistic outrage. Both are shrugged off. But a single terrorist attack, particularly if it comes from a perceived foreign source, can trigger a nationalistic outpouring that can dominate the media for days and weeks. 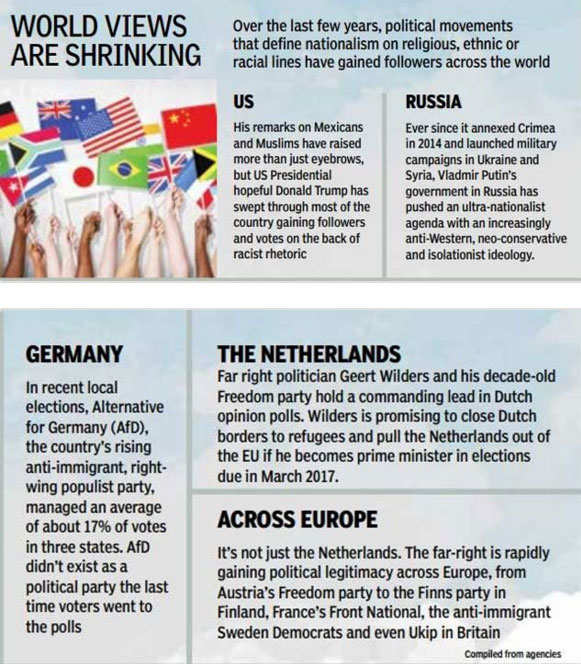 Every death is different, and indeed every terrorist attack is different, depending on its geography and its victims. While America and Europe fret about terrorist incidents in their territory, provoking nationalistic fury, there is little concern for terrorist attacks in distant India. Within India itself, a terrorist attack in Delhi or Mumbai has a different resonance from the one in Dantewada or Aizawl, which are outside national — and nationalistic — mainstream conscience. And no one cares for attacks in Africa, including within Africa itself: Burkina Faso, Mali, and Ivory Coast have all seen attacks as bloody and lethal as the ones in Brussels and San Bernardino without getting a fraction of the coverage.

All this is broadly in tune with the first principles of patriotism (when love of your people comes first) and nationalism (when hate for people other than your own comes first). The difference between patriotism and nationalism, explained the late American columnist Sydney Harris, is that the patriot is proud of his country for what it does, and the nationalist is proud of his country no matter what it does. The first attitude creates a feeling of responsibility, but the second a feeling of blind arrogance that often leads to war, as has been demonstrated again and again in history.

But increasingly — as evident in India, the US, and even in Europe — nationalism is coming to be identified with one religious or racial or ethnic constituency at the expense of others who are different in number or belief or influence. They are also taking on newer slogans — Donald Trump’s Make America Great Again — to address contemporary insecurities, or building on slogans that originally invoked God and Country — Bharat Mata ki Jai.

It seems a dreadful indignity to have a soul controlled by geography, said the philosopher George Santayana — but it has only increased with greater migration and interaction that one expected would makes national boundaries less relevant. Both America and Europe, which seemed to have elevated themselves to a more genteel form of civic nationalism that transcended ethnic or racial identity, are quickly returning to identity-based nationalism as their largely white Anglo-Saxon populations feel the pressure of immigrants, mainly coloured people, crossing borders looking for a better life.

A quarter century ago, the world seemed to be breaking down walls and countries appeared to be transcending their narrow national identity to form continent-sized (trading) blocks. Suddenly, along with the new slogans, walls are coming up everywhere…from India’s fencing of borders with Pakistan and Bangladesh, to Israel’s notorious wall against Palestine, to Trumpistan’s proposed wall on the border with Mexico.

One Internet meme that surfaced on social media after Wednesday night’s thrilling cricket match against Bangladesh captured the new mood. It showed the now famous photo-finish of India’s captain running out the Bangladeshi batsmen six inches short of the batting crease. The caption read: MS Dhoni doing what Mamata Banerjee cannot do — preventing a Bangladeshi from crossing the border.

UN Calls On Tanzania to Avoid Violence as Citizens Vote

Saving and Loan Groups Give Lifeline to Kenyans During Pandemic