NEW DELHI: The Rs 3,565-crore AgustaWestland contract for buying VVIP helicopters from Italian company Finmeccanica, signed in 2010, involved payoffs to Indian officials, an Italian appeals court has ruled. The ruling overturns a lower court judgement that said corruption could not be proved. The Milan Court of Appeals — equivalent to an Indian high court — also found two of Finmeccanica’s then top bosses guilty of international corruption and money laundering.

Giuseppe Orsi, the powerful former chief of Finmeccanica, has been sentenced to four-and-a-half years in prison. Bruno Spagnolini — who headed chopper division AgustaWestland — has been given a four-year jail term. The court also ordered the two executives to pay 7.5 million euros ($8.5 million), a sum corresponding to the amount deemed to have been allegedly paid in bribes, an agency report said.The two officials were held guilty of paying bribes to Indian officials for performing their duty — something that they should have been doing anyway.

This is a key change from the earlier acquittal from charges of paying grease money to Indian officials for not performing their duty, or tweaking rules to favour the company. The two convicted executives can file an appeal in the apex Italian court — the Supreme Court of Cassation. 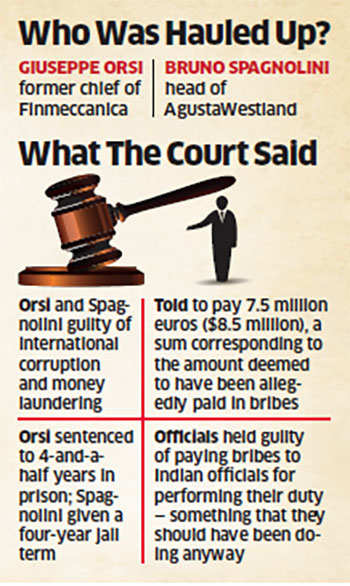 The full text of the appeals court ruling hasn’t been released. But judges have upheld the case of the prosecution that the two executives used middleman Guido Haschke — a Switzerland-based consultant — to pay grease money. Prosecutors have claimed that money was paid to close associates of former Indian Air Force chief SP Tyagi, who is named as a prime accused in the Italian prosecution case. Italian prosecutors have also alleged that another part of the bribe money was paid through UK-based consultant Christian Michel to political entities in India, and speculated that senior leaders of the then ruling party, Congress, were among the recipients.

Michel is currently on the run, and there’s an Interpol ‘red corner’ notice against him following India’s moves to arrest him in the case. Finmeccanica has always denied any wrongdoing in the case and the two convicted former bosses have said they would appeal the court decision shortly. Tyagi and his cousins have also denied receiving any payoffs to fix the deal. Michel has said he was not involved in bribing Indian officials and claimed he is the victim of a political vendetta.

The Enforcement Directorate has been pursuing the case too, with Michel’s business dealings in India being probed. The Central Bureau of Investigation is separately probing another case but it has not made much progress as authorities in Tunisia and Mauritius — where the alleged bribe money was routed to — have not responded to requests for information.

In 2013, the Congress-led United Progressive Alliance government cancelled the VVIP chopper deal with AgustaWestland on grounds that the integrity pact was violated. The government has recovered most of the money paid to the Italian company for the contract.