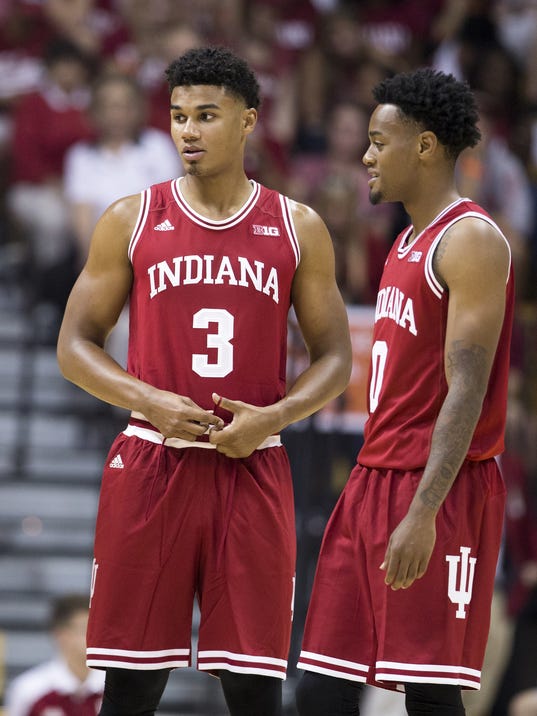 BLOOMINGTON – It wasn’t pretty. It probably should have been more convincing. But IU picked up coach Archie Miller’s first-career win in his new job on Sunday, 86-77 over Howard.

The Hoosiers struggled again, though not as much as they had in their 21-point season-opening loss to Indiana State. Here are three reasons Indiana was able to even its record at 1-1.

The kids stepped up

What’s going on with some of IU’s veterans is a different conversation, but when young Hoosiers needed to be counted Sunday night, they stepped up.

Justin Smith finished with a double-double. De’Ron Davis hit double figures for the second-straight game. Al Durham came off the bench and explained with his play why Miller was so eager for him to lose his preseason minutes restriction (hamstring problem).

In total, IU’s freshman and sophomore classes accounted for 59 points, 27 rebounds and 14 assists Sunday night. On a team with five seniors, youth being served helped turn the tide after a worrying start.

Why the comfort? Miller said multiple times in the preseason he felt his freshmen had a leg up on normal first-year players, because everyone was starting with a clean slate under the new staff. It might be equally fair to wonder whether the Hoosiers’ younger players are easier for Miller to condition to his way of doing things, offensively and defensively, because there’s less muscle memory built up to break down and replace.

Whatever the reason, more nights like Sunday will be required.

It wasn’t the only reason Howard stayed closer than it probably should have, but IU’s dismal free-throw shooting performance helped the Bison plenty.

The Hoosiers missed their first seven free throws, and 10 overall in the first half. They finished the game 12-of-29 from the free-throw line.

Fan complaints about not working on free throws enough are both understandable, and almost certainly misplaced. IU had a bad night. But a team this offensively limited can’t afford many bad nights.

Give Indiana credit for this — the Hoosiers are not a great offensive team by any means, but they shared the ball well Sunday.

Of the Hoosiers’ 33 made baskets, 25 were assisted. Josh Newkirk led the effort with seven assists, a night spot in an otherwise up-and-down night. Durham moved the ball well, even if he was guilty of the occasional Hollywood pass attempt. De’Ron Davis passed really well out of the post, particularly given the double teams and extra attention Howard’s 2-3 zone afforded him.

As with the free-throw discussion, this is a team that’s going to have to maximize what it does well on offense, because the free-scoring lineups of Tom Crean’s tenure just can’t be replicated with this roster right now. Smart ball movement sets up easier and more preferable shots. Indiana would do well to carry Sunday’s success forward.